With Darkmantles in hot pursuit the party flees further down the passageway. The passageway slopes down and bends a sharp corner, the party find themselves standing in front of an eerily familiar cavern filled with stagnant water and stalagmites. They had entered the ground floor of the grotto that they could see from the ledge above.

The sweep of the Darkmantles taking flight became suddenly louder coming from overhead as the party looked up, seeing numerous sets of red eyes peering down at them. Gundred spies an exit to the west and the party immediately enter the shallow water as the Darkmantles swoop down. A few lucky rolls and the party made it to the relative safety of the passageway but took no chances and continued running without looking back.

*Sarah informed me later that she found this encounter absolutely frustrating. It was the first encounter the group were given where the goal wasn’t to simply murder everything. The goal was to realise the level of danger, escape and survive. I also was experimenting with mobs which required opposing strength checks, something the group were all terrible at. *

The group continued running for a small while and then slowed to a walk, convinced that they were no longer being pursued the group opted for a short rest to recoup some much-needed spells and to use some important Hit Dice for extra health.

While resting Aurelia notices something strange, she seems to feel stronger, and her dark vision felt different. Blinking her eyes, she noticed she could sense her surrounding even with her eyes closed. She once again also notices that her blade is completely clean of any blood or gore from the previous fight.

*Aurelia still hasn’t determined all the benefits of her Crescent Claw. At this time she received temporary hit points and gained blindsight. *

Feeling well rested the party continued further on and before long encountered another cavern. This cavern was split in two by an 80ft wide chasm. Spanning the chasm and covering most of the walls were thick strands of webs. Asterin investigated the web taking a sample and after some cross checking with both Wendell and Merric they determined that the webs could either be constructed by a Giant Spider or an Etin.

Halfway out into the chasm the party could just make out a large column of rock, hanging to the side were several large web cocoons. One small cocoon reflected a metallic glint from the light of the driftglobe. Figuring that going forward was better than going back that party braved the sticky bridge and opted to tie ropes to each other to prevent any mishaps before venturing forward.

*I made a terrible blunder here. The intention was to show how sticky and difficult it was to walk across along the web by treating it like the web spell, Dex DC12 or become restrained or become restrained. Break restrained Str DC 12 to be free. This spell works well during an encounter due to rounds etc, doesn’t really work well when battle hasn’t commenced. My mistake was requiring the group to do too many checks as they traversed the bridge, when a single check each would have sufficed. Live and learn. *

After a few failed checks, mainly by the NPC and resulting assisted checks, the party eventually made their way over to the middle of the web and Aurelia broke open one of the cocoons. One cocoon had a rotting body of kobold holding a leather bag free of rot and a vial. Sensing some magic from both items, Aurelia stowed them away and began breaking open the next cocoon releasing a spawn of spiders. 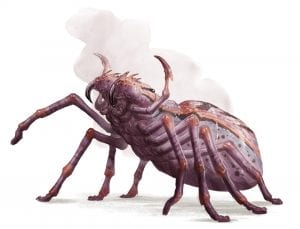 At this same moment five giant spiders made their appearance from below the webs and everyone rolled initiative. Wendel and Merric raced to the front but were thwarted by the webs and were only able to intersect one of them, leaving Asterin to fend off three spiders alone while her sister was dealing with the swarm.

Asterin held her ground and showed her tempest cleric ability felling one spider, but the other two proved to be difficult to hit and retaliated with vigour. Aurelia quickly finished dealing with the swarm but couldn’t reach her sister, so instead she drew her hands forth casting Darkness in an attempt to separate one of remaining spiders from descending onto her sister.

Wendell’s eyes grew wide at the sudden sphere of darkness appearing before him, looking a little suspect at Aurelia in the process. Focusing his attention on the creature in front of him with Merric by his side, the two halflings downed it quickly. Another round down and the spider bites were slowly taking their toll on Asterin.

Aurelia finally being able to reach her sister, let loose with Green Flame blade felling another spider already weakened by Asterin earlier blows. As a spider appeared from the sphere of darkness Wendell burst through some ki points, rending it into pulp with his flurry of blows. With no opponent in front of him, Merric raced over to join the others and landing the killing blow to the final spider attacking Asterin.

The high-pitched death rattles of the spiders echoed off the cavern walls, as the party took a breath. One spider corpse smouldering with green flame from Aurelia’s spell, the fire quickly spread into the webs weakening them that the party stood upon. The party barely had a moment to look at each other before the web below Asterin’s feet broke away and she feel down out of sight.

Find out what happens next session.

My Fungi Friend Aurelia watched in horror as the webbing beneath Asterin’s feet gave way and her sister fell out of sight. The rope around

Sticky Situation With Darkmantles in hot pursuit the party flees further down the passageway. The passageway slopes down and bends a sharp corner, the party

Fly You Fools! Lesri had a good drunk on which has been completely ruined by the party’s shenanigans and now an entire tribe of hobgoblins

Out of the Frying Pan… A loud roar was all the warning the party had before the beast threw its bulk against the barricaded door.

Shortcuts The seven ruined towers of Cragmaw Castle stood before the players, the entryway beckoning them onwards. However, the players were apprehensive about simply approaching

What’s that? Our name in Dragon+?!