From the Journal of Susan Frankston

We have made it through another holiday season to ring in a new year, a new decade! Frankie and I enjoyed a quiet, restful, Christmas here in Arkham – even if we do miss the frivolities of an English Christmas! It appears our quiet is coming to an end however – Tom called today. He has a new case, and he needs all hands on deck.

All hands being Tom, William, Frankie and I. Tom runs a little PI agency in town, one that he started due to leaving the police force because he was frustrated with not being able to do everything (and I do mean everything) in his power to “catch the bad guys”. He has also seen in this line of work plenty of things that couldn’t be explained. Suffice to say he is handy in a pinch, runs a good agency, and his gut instinct is rarely wrong.

William is a wonderful fellow. Well read, which is not surprising given his work as an antiquarian and fit as a fiddle. He does get a mite stressed at times, so I hope that this latest job from Tom doesn’t cause poor William too much upset.

My dear Frankie. Father Frankston if we’re being proper about it, but he prefers Frankie. He is everything you’d expect from someone who was part of the Roman Catholic Church for so long – calm, patient, a good listener. And then there’s everything that doesn’t fit in with the church – like our marriage. The knowledge that he gleaned from his time in the church – especially those surrounding exorcism – is of particular interest to me. 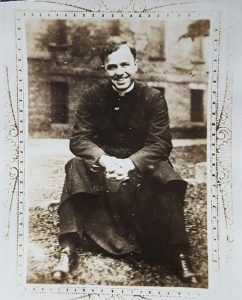 Our professions are most definitely not considered mainstream, but they are endlessly fascinating to pursue. The supernatural, extraordinary things that I have witnessed in my travels are a constant source of weirdly uncontained joy as I peel back the layers of what they are. Digging ever deeper, I am always finding more unanswered questions to pursue. They call my line of work Parapsychology. As much as I hope that my profession is why Tom is needing me for this job, I won’t be getting my hopes up for something mysterious to unravel. There are far too many false cases coming across my desk lately.

We met up with Tom at his office earlier today. His latest case has been brought to him by Gerald Fraser – a well-known banker in town. His son, James, has gone missing somewhere between Arkham and Kingsport. James was a student at Miskatonic University where he was considered a bit of a rebel, but was studious nonetheless. His sweetheart lives in Kingsport. The last that Gerald had heard from James was via a phone call in which the two got into an argument, which ended with James informing his father that he was tired and going to spend the night at a motel before continuing his journey to Kingsport. According to both the father, and (as relayed by Gerald) the sweetheart, James never arrived. They do not know if he made it to the motel either.

Gerald has given Tom both a $200 retainer, and a photo of James, to begin our investigation. I sincerely hope we find this young man healthy and well.

A Valiant Effort  Nundro, Gundren’s youngest brother, was face down on floor laying in a pool of his own blood. Gundren stared in shock at