John – Recalling that they had found a key off the Hobgoblins and the armoury hadn’t been unlocked the gang quickly double timed it back down into the cellar but were somewhat disappointed that the armoury only contained normal weapons, which were considered downgrades.

Back outside Aurelia fearing what would become of Droop should the townsfolk see him, explained to Droop that he was free now and let him loose before re-entering town.

*Droop… I wonder what future holds for this cowardly goblin.*

Escorting the prisoners to the townsmaster’s hall the group decided that the best course of action was to give the remaining cellars supplies and the contents of armoury to the townsfolk for which the town was very grateful.

*I love it when players do this, their actions were unexpected and will have an effect on the future of Phandalin.*

Asterin and Wendel sat down with Sildar who was shocked to learn that identity of the Redbrand leader was none other than his missing operative, Iarno. He placed a bounty of Iarno’s head, dead or alive and further advised that he was determined to bring order to Phandalin. To do so Cragmaw Castle and Wave Echo Cave locations were of a priority.

Meanwhile, Aurelia, who was disappointed in not finding the deed to Tresendar Manor, together with Merric went to see Griska over at the Craven Dragon to discuss options. Merric was keen on acquiring thieves’ tools and seemed confident that Griska would be forthcoming. Gregor rebuffed them at the bar denying them access to Griska, they were informed that Griska was no longer interested in their deal and told them to get lost. Both were disappointed to hear this. Merric soothed his disappointment by buying a crowbar.

*I didn’t mean to thwart Merric’s attempt to get theives’ tool he was just a little ahead of me. Your typical merchant isn’t likely to carry thieves’ tool so seeking out Griska was certainly creative. *

Surprised at this turn of events the group re-joined at the village square unsure how to continue. During their discussion, they were approached by a courier who delivered a request to meet from the owner of the Phandalin Miner’s Exchange, Halia, who had information for them. With nothing better to do the group sat down to meet Halia, an individual who even frightened Griska.

*I’d been waiting for Halia to be introduced. Couriers are great to use when the party seem a bit unsure. *

Entering the Miner’s Exchange the group discovered a literal Fort Knox in the south side of Phandalin and they made their introductions to Halia. A very shrewd individual, Halia had already heard about the group’s exploits. She volunteered some information about Griska’s smuggling and drug activities revealing the location of one of his smuggler’s dens.

Halia also offered a reward for the Tresander Manor deed as well. It turns out she had also been looking for the deed and was quite adamant in stopping Griska from acquiring it. When questioned about the volunteering of the information, she merely replied that any problems that the group caused Griska were in her best interest.

Pondering their next action, the group decided to return to the inn. On the way back to the inn, Aurelia spotted Meredith (one of the ladies from the Craven Dragon) trying to keep her face covered as she made her way across the square. Electing to follow her, Meredith led them to a small building which turned out to be the local orphanage. A small figure, concealed in the shadows of the orphanage’s roof, watched on.

Revealing their presence to Meredith, she became frightened and hurried the group inside before anyone could see them, nodding to the figure in the shadows. The small figure dropped from the roof, following them inside revealing herself to be a female human teenager who was trailed by a grey cat. Once inside the she leaned up against a nearby wall, not even pretending to not listen to their discussion.

*Enter one of my favourite reoccurring characters.*

Meredith’s fear became evident, as two children in the orphanage were none other than her children. After much persuasion by Aurelia, Meredith admitted to the group that she was not a prostitute by choice and Griska had openly threated her children to keep her compliant.

Having heard of the groups’ exploits with the Redbrands Meredith decided to trust them by revealing that Griska was a drug runner and he was hiding Glassstaff. She didn’t know where, but it was likely in the smuggler’s den that Halia had revealed. It would also be locked, as Griska wouldn’t leave it unattended.

The teenager confidently strolled over and sat down at the table, despite not being asked and declared that the group required her skills. Meredith, begrudgingly, introduced the girl as Kitty who could probably help if the group could tolerate her attitude. Kitty’s only response was to yawn. Having made the introductions, Meredith had to leave before her absence was noted, and wished the group luck.

*Brief note on Kitty, she was one of my original characters from 3.5e She is a 13yr old orphan who was known for cat burgling. Originally modelled as a female Jimmy the Hand, but had maternal instincts for the children in the orphanage she grew up in. She was a multiclass Rogue/Sorc, who was not aware that she had magic running through her veins and her pet cat was really her familiar. But 5th edition sorcerers aren’t allowed familiars (without feats) so I made her an arcane trickster instead. I still like roleplaying this character she was one of the first Heroforge minis I had made. * 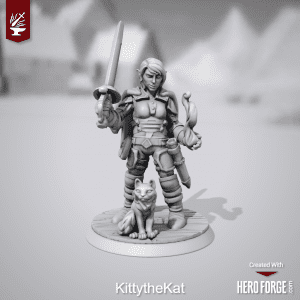 Sensing her dubious nature, Merric asked Kitty about some spare theives’ tools, which she was only happy to provide to a fellow thief. Declaring that this town was downright boring, Kitty enquired about the groups’ plan. A decision was reached to raid the smugglers den that night. After a small celebration at the Stonehill Inn to congratulate the group for defeating the Redbrands, the group crept out into the night.

*I had decided to give the players another opportunity to take down Iarno. I know a reoccurring villain can be very helpful for campaign writing, but I had plans for the staff in Iarno’s possession. *

The raid went ahead that night on the outskirts of town. Griska had rented out the large cellar of one of the farmer’s barns and had been using it to smuggl drugs into town. Three Redbrands were guarding the locked cellar doors. Aurelia and Asterin stayed back to offer range support while the other three attempted to sneak upon them.

Attempted is the optimum word, as Wendel tripped over some farming equipment leaning against the barn revealing their location to everyone within earshot. The Redbrands rapped loudly on the door and were quickly reinforced by another five ruffians. A massive brawl went down outside the barn and thankfully the girls covering spells turned the tide.

Wendell was quite hurt in the fight, but fortunately Asterin was able to heal him. Kitty quickly picked over the fallen ruffians, and the group entered the barn’s cellar. Apart from the various barrels, the cellar appeared empty. A quick cast of Detect Magic by Aurelia revealed a magic presence beyond the far wall and a secret door was revealed. Iarno stood within the room beyond and the fight begun.

*OMG, 2 rounds! What a one-sided battle, Iarno did not do a single point of damage. Note to self: a single caster cannot hold up against a group without backup. How did I not see this? *

The funniest side of the battle was that Aurelia was hit with a Charmed Person spell, only Asterin was able to detect the spells effects but kept the information to herself. Iarno surrendered before he could be killed, and the group acquired the staff of defence that was in his possession. On that note we ended the session.

John – Equipped with a whole range of new abilities from their new subclasses the group headed over the north bridge spanning the crevasse. Aurelia

John – Outside the cellar the party had a short rest and discussed the problem with the locked door to the armory. During this discussion

John – Last we left our party, Eve was giving Wendel the time of his life whilst the remaining party members were having a social

“There are no shipping options available..” Cart Error Msg

Get notified about the latest products, deals and our monthly newsletter giveaways!